You can find on this page the Dallas bike map to print and to download in PDF. The Dallas bicycle map presents the bike routes and lanes of Dallas in Texas - USA.
The award-winning Dallas Trail Plan has over 160 miles of the most beautiful and diverse urban hike and bike trails in the country as its mentioned in Dallas bike map. Located throughout the city, these trails connect communities, provide alternative transportation corridors, and have become an essential recreational amenity for our citizens. 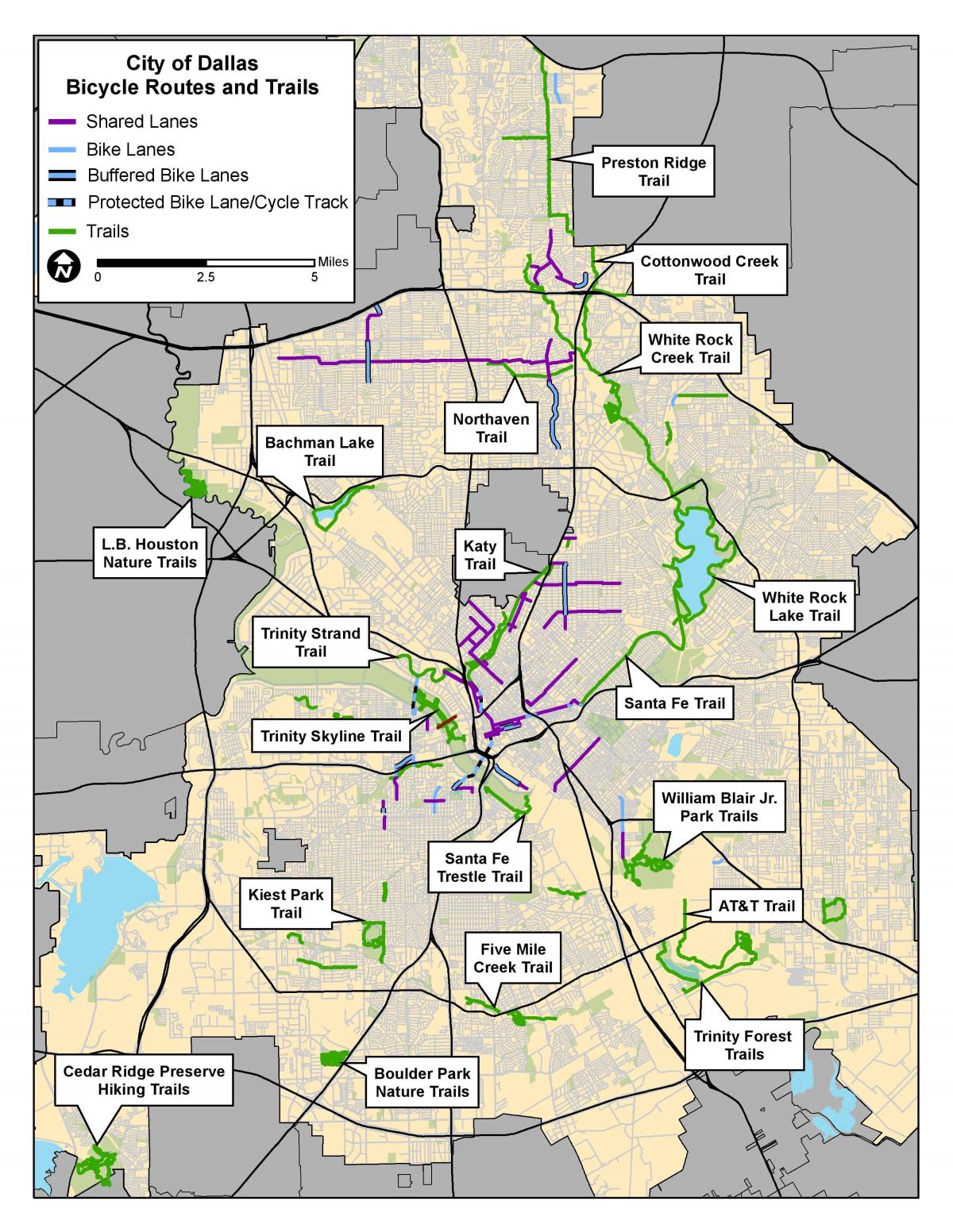 Most of the pedestrian-friendly areas in the city are near downtown and Uptown as you can see in Dallas bike lane map. The majority of Dallas, whether or not it was developed with the pedestrian in mind, was completely rebuilt or reworked to accommodate the vehicle in the mid-20th century. In the late 1990s and early 2000s, the importance of the pedestrian, bicyclist, and those who use mass transportation began to be realized and most new developments cater to all forms of transportation. Walking trails, though once nonexistent, are also starting to be built and improved by the city. Perhaps the flagship is the Katy Trail, built over the old Katy Railway, which goes from the Victory Park neighborhood through Uptown and Oak Lawn up to Knox Park. Other trails include the levee-top trails along the Trinity River and the Texas Buckeye Trail in the Great Trinity Forest of south Dallas.

The city maintains walking trails at area parks including parks around White Rock Lake and Bachman Lake as its shown in Dallas bike lane map. The city maintains 800 lane miles of cyclist-selected bike routes along low-volume roadways throughout the city that parallel major thoroughfares. The City does not employ bicycle control devices like bike lanes, as the necessary pre-conditions do not exist. The city has also installed a series of Pedestrian Tunnels in Downtown Dallas, although these have been under much criticism regarding their ability to "suck the life off of" the aboveground streets. Use marked bike lanes or paths when available, except when making turns or when it is unsafe to do so. If the road is too narrow for a bicycle and a car to travel safely side by side, you have the right to ride in the middle of the travel lane. Bicycling is permitted on all main and local streets throughout the City, even when no designated route exists.

Shared lane markings are pavement markings that are placed within the vehicular travel lane of the roadway. Unlike bicycle lanes, they do not designate a particular part of the roadway for the exclusive use of bicyclists. Shared lane markings indicate the location where bicyclists should operate within the travel lane. The bicycle markings include two chevrons over a bicycle pointing in the direction of vehicle travel to indicate that bicyclists should ride in this direction. The markings may be placed within travel lanes of any width on roadways posted at 35 mph as its mentioned in Dallas bike lane map. A bike lane is a portion of the roadway designated by striping, signing, and/or pavement markings for the use of bicyclists and have a width of five feet. Bicycle lanes include a bicycle pavement marking with an arrow to indicate that bicyclists should ride in the same direction as adjacent motor vehicle traffic.