You can find on this page the Dallas streets map to print and to download in PDF. The Dallas roads map presents the road network, main roads, routes and motorways of Dallas in Texas - USA.
Skillman Street in Dallas is named after W.F. Skillman a Dallas banker, which is pretty boring (see Dallas streets map). But it was originally named was originally named Lindbergh, for Charles Lindbergh. However during the later 30 he was known as a Nazi sympathizer, and the road was ultimately renamed following a public outcry. 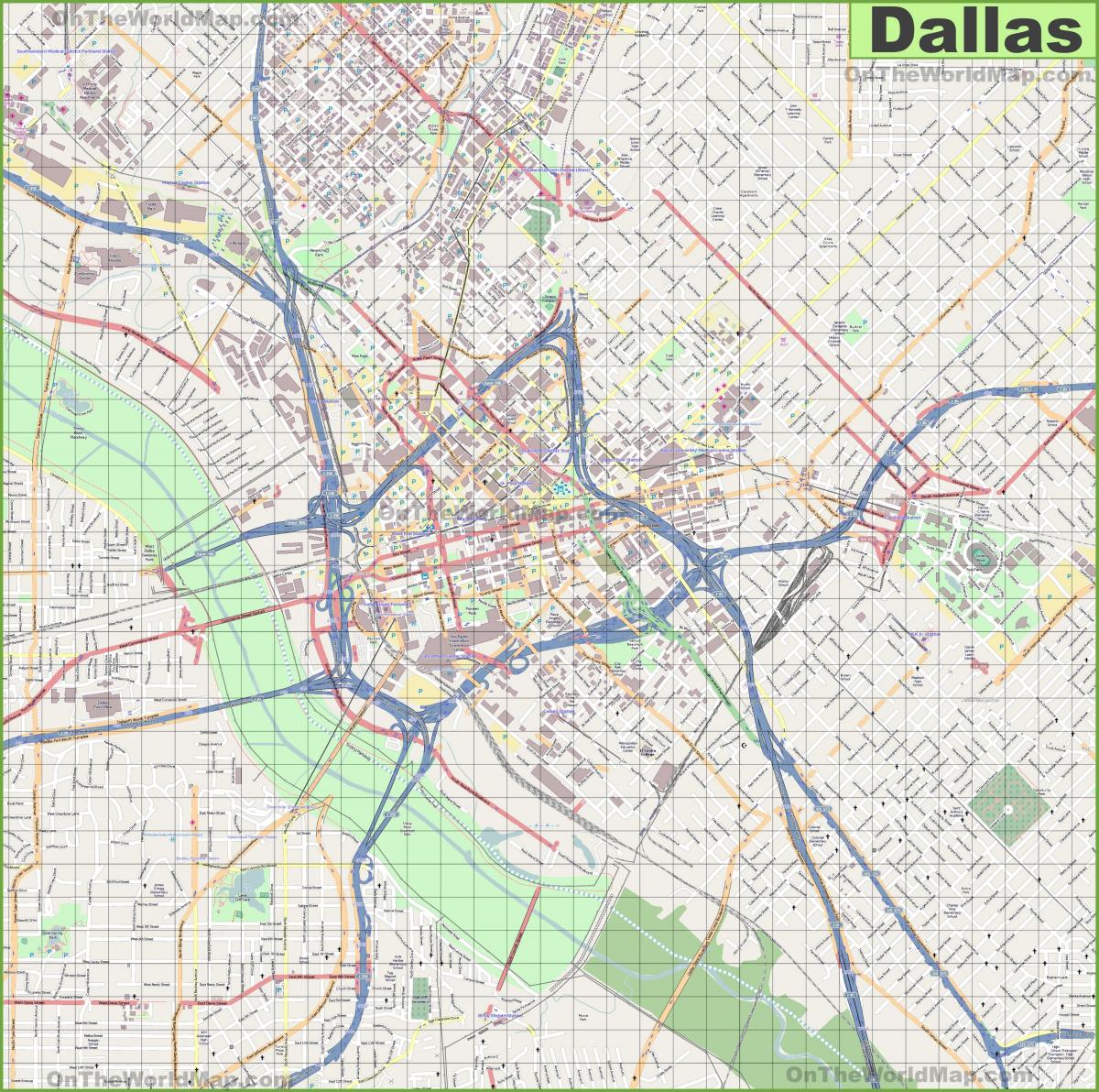 Dallas is devoid of any major street grid as a whole, though a number of major attempts intersect at awkward angles and in confusing interchanges around the city. The main street grid in the center city runs 45° to the typical N/S/E/W grid, creating confusion for many out-of-town visitors. This street grid prevails primarily in east Dallas, though it also permeates Oak Lawn, portions of downtown, and the Cedars as its shown in Dallas streets map. Another much smaller street grid lies downtown between Pacific and Young streets — it is about 5° off the typical N/S/E/W grid, and is on average 5-8 streets across N/S and about 3 miles (5 km) wide E/W. There is also a fairly extensive N/S/E/W grid around the original city of Oak Cliff.

The rest of Dallas, developed from the middle of the 20th century on, is typically on a N/S/E/W grid, especially with major thoroughfares. In trying to make the city traversable, city planners have over time created wide boulevards that jump between the right-of-ways of multiple minor streets, trying to force a wide road wherever they can discover space for it. This forces the destruction of the minor streets original paths, a name-change for the boulevard or minor streets, and roads (e.g. Cole 1, 2, 3) that exist in two or more places as its mentioned in Dallas streets map. Major thoroughfares in Oak Cliff typically do not cross the Trinity River, and when they do, they frequently do not continue with the same name on the north or eastern sides, which creates a degree of confusion. Also, many times a street will change names each time it crosses a municipal border.

Elm St. from Good Latimer Expwy. to Exposition Ave, a recent redo of the street—widening the sidewalks, removing a lane of traffic (down to two), and adding parallel parking between landscaped bump-outs—has made Elm Street a stickier place and helped create a better connection between downtown and the Baylor campus. 200, 300, and 400 blocks of Jefferson Blvd as you can see in Dallas streets map, developers like Jim Lake and Monte Anderson have taken care to make sure the street—which has a mix of neighborhood and retail, great bones with head-in parking, and broad sidewalks—remains dedicated to its neighboring communities, not to tourists. 1100 block of W. Oleander St., Fort Worth, Oleander is a very small example of how a narrow, quiet, one-lane residential street can appeal to the eye and add to the rebirth of an entire area. A canopy of trees lines both sides, with townhomes opening to the street and streetlamps casting a welcoming glow. 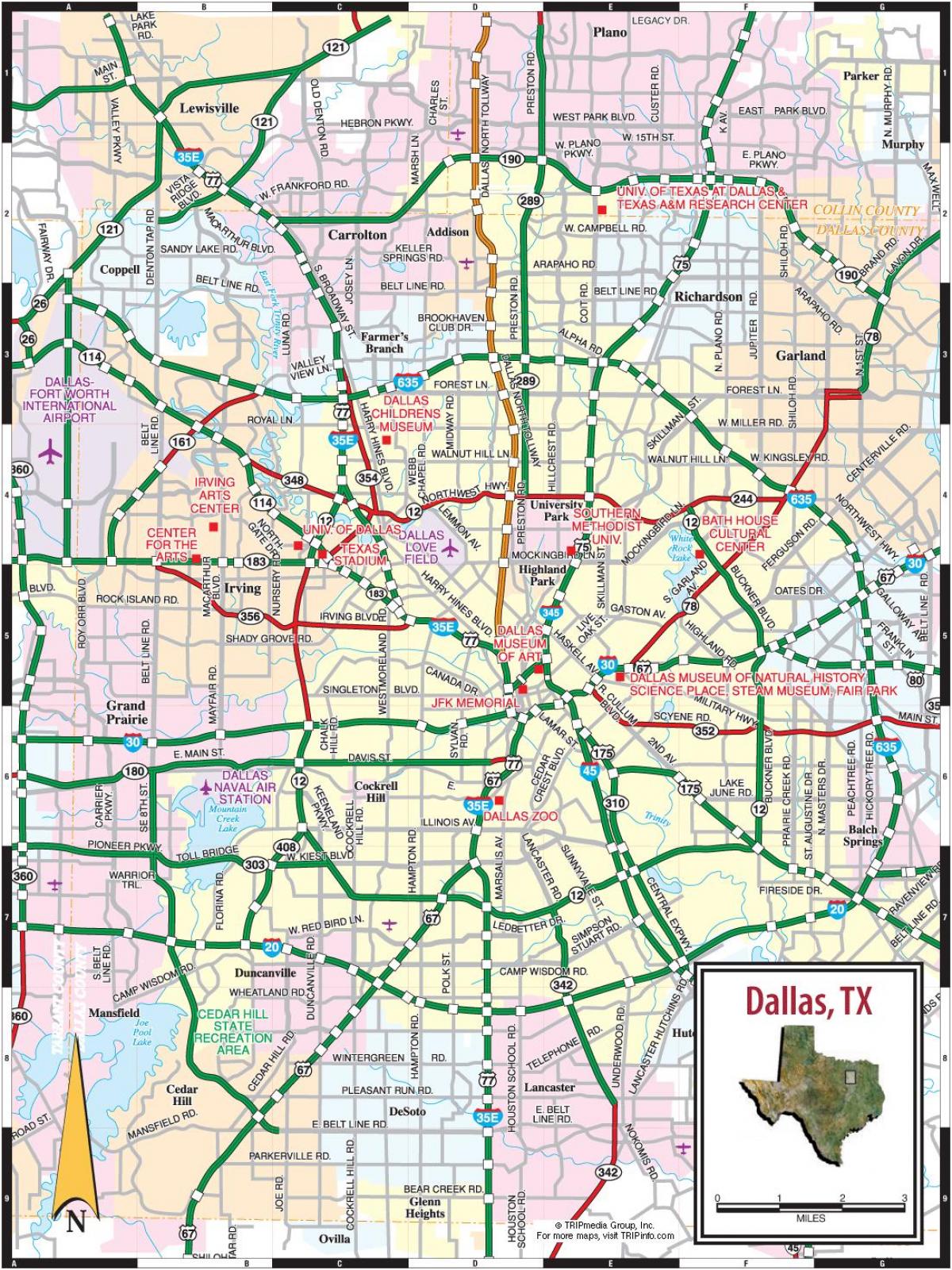 The city of Dallas is at the confluence of a large number of major interstate highways—Interstates 20, 30, 35E, and 45 all run through the city as its shown in Dallas roads map. The city freeway system, as it has no major geographical inhibitors surrounding it, is set up in the popular hub-and-spoke system, much like a wagon wheel. The center of the system is the downtown freeway loop, made up of Interstate 30 on the south, Interstate 35E on the west, Spur 366 on the north, and Interstate 345 on the east. (Interstate 345 is a short spur of Interstate 45 that connects Interstate 45 with US 75.) The next major freeway loop is the Interstate 635/20 Lyndon B. Johnson loop, and the outermost is the tolled President George Bush Turnpike. Inside these freeway loops are other partially limited-access and parkway-style loops including Loop 12 and Belt Line Road.

Another beltway around the city is planned upwards of 45 miles (72 km) from downtown in Collin County. Radiating out of downtown as the spokes of the system are Interstates 30, 35E, and 45, US 75, US 175, Spur 366, the tolled Dallas North Tollway, and further out SH 114, US 80 and US 67 as you can see in Dallas roads map. Other major highways within the city that do not serve primarily as spokes include SH 183 and Spur 408. Portions of Interstates 30, 35E, and 635, and US 75 also have either bidirectional or reversible HOV lanes. Future highway plans typically integrate usage of both HOV and/or HOT (tolled) lanes, e.g. the expansion of Interstate 635. Plans for the road include HOV lanes and massive HOT tunnels in the heavily congested segment of the highway between, generally, Interstate 35E and US 75. This portion of the highway travels through one of the densest regions of north Dallas, which, coupled with its primary role as a circulator for commuters, makes the freeway constantly congested at all hours of the day and night.

The city of Dallas freeways, much like the city, are generally relatively new and in good condition. TxDOT is famous for its highway system in the state and many of what could be considered "flagship freeways" lie within the city. One example is North Central Expressway or US 75, which was trenched, immaculately landscaped and heavily ornamented between downtown and Loop 12 in the 1990s. Interstate 30 west of downtown Dallas was recently brought to a level near North Central Expressway and Interstate 635, Interstate 30 east of downtown, and Interstate 35E all share similar futures as its mentioned in Dallas roads map. Construction, like many cities, is a constant burden for the city heavily automobile-centered culture.