You can find on this page the Dallas topographic map to print and to download in PDF. The Dallas elevation map present the topography, river and relief of Dallas in Texas - USA.
The topographical features that come to mind are waterways., heavy blackland soils, sandy clays in west; drains to Trinity River; Joe Pool Lake, White Rock Lake, Mountain Creek Lake, Lake Ray Hubbard, North Lake as its shown in Dallas topographic map. 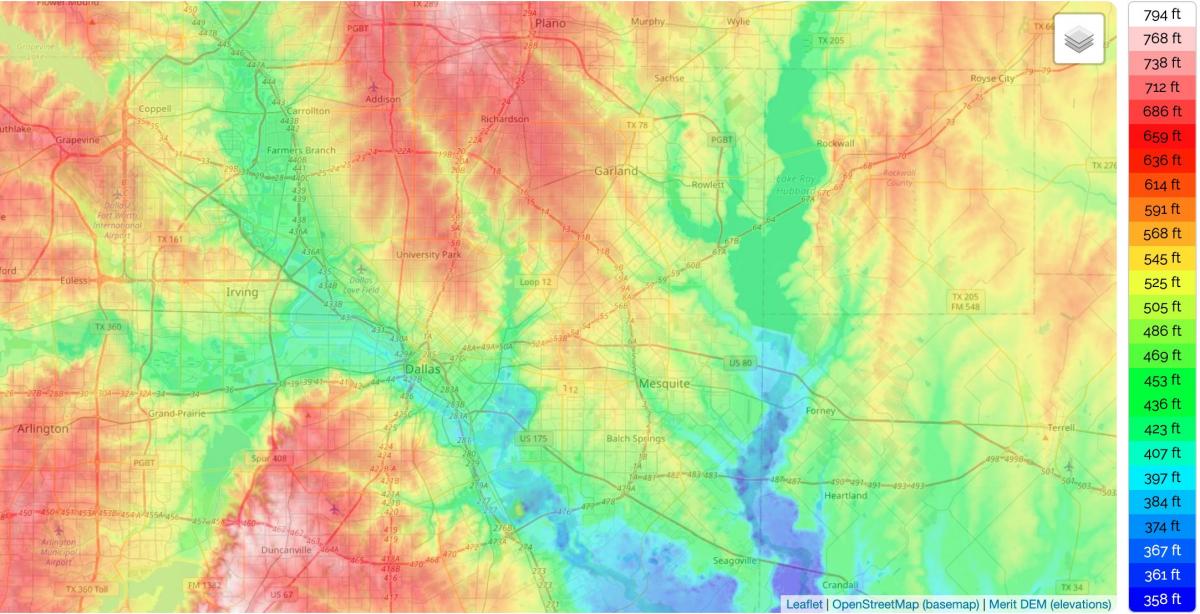 Dallas and its surrounding area are mostly flat; the city itself lies at elevations ranging from 450 feet (137 m) to 550 feet (168 m) as you can see in Dallas elevation map. The western edge of the Austin Chalk Formation, a limestone escarpment (also known as the "White Rock Escarpment"), rises 200 feet (61 m) and runs roughly north-south through Dallas County. South of the Trinity River, the uplift is particularly noticeable in the neighborhoods of Oak Cliff and the adjacent cities of Cockrell Hill, Cedar Hill, Grand Prairie, and Irving. Marked variations in terrain are also found in cities immediately to the west in Tarrant County surrounding Fort Worth, as well as along Turtle Creek north of Downtown. Dallas, like many other cities in the world, was founded along a river. The city was founded at the location of a "white rock crossing" of the Trinity River, where it was easier for wagons to cross the river in the days before ferries or bridges.

The Trinity River, though not usefully navigable, is the major waterway through the city. The river is flanked on both sides by 50 feet (15 m) tall earthen levees to protect the city from frequent floods as its mentioned in Dallas elevation map. Since it was rerouted in 1908, the river has been little more than a drainage ditch within a floodplain for several miles above and below downtown Dallas, with a more normal course farther upstream and downstream. But as Dallas began shifting toward a postindustrial society, public outcry about the lack of aesthetic and recreational use of the river ultimately gave way to the Trinity River Project, which is scheduled to be completed in the 2010s. If the project materializes fully, it promises improvements to the riverfront in the form of man-made lakes, new park facilities and trails, and transportation upgrades.